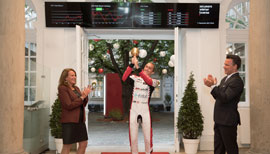 (Vienna) The Vienna Stock Exchange celebrates a quarter of a millennium today: 2 September 1771 was the first trading day in Vienna after Empress Maria Theresa initiated the foundation of a Stock Exchange ten years earlier. In the eventful 250 years, the stock exchange evolved continuously, from a state-owned marketplace to a modern information technology and service provider. Trading shifted from the floor to the digital network. Today, it combines tradition and reliability with future and speed. In this spirit it also celebrates today's anniversary: Ferdinand Habsburg-Lothringen, descendant of Maria Theresa and racing driver, makes a pit stop at the stock exchange today and rings the opening bell on the 250th anniversary. The Austrian stock barometer ATX showed the level of 7,279.93 points at the opening, including dividends, not far from the all-time high on 13 August 2021 (7,308.32 points).

"It is a special honour for me to ring the stock exchange bell today and with it the start of the next 250 years. As in racing, nothing would run here without innovation. The Vienna Stock Exchange is a prime example of personal responsibility, a system that works in the long term and gives the people a chance to move forward and profit. I am proud to be a descendant of such a strong woman as Maria Theresa and to be able to celebrate her work here a quarter of a millennium later," said Ferdinand Habsburg-Lothringen at the press breakfast at the Vienna Stock Exchange.

"Innovations also pave the way to the CO2-free economy of the future. Industrial nations that know how to use the capital market will grow faster and more sustainably. At the same time, citizens will have the opportunity to invest their capital in innovative companies. The knowledge about this should be packed into the school bag of the future generation of investors. After all, knowledge about the stock market must not remain an elite topic," says Christoph Boschan, Member of the Board of the Stock Exchange, on the occasion of the anniversary.

Future Forum – Focus on the next 250 years

Not only tradition, but also state-of-the-art technology and a forward-looking view characterise the domestic stock exchange. This week, the UNIQA Tower on the Danube Canal will be illuminated in the spirit of the stock exchange's anniversary. This whole year, national and international experts and academics discussed how they look forward to the next few years at the stock exchange's Future Forum. The most recent topic was "Blockchain in the financial world – revolution or hype?". A mini-documentary shows the path from Vienna's trading floor to the electronic network. Numerous board members and investor relations managers congratulated on the anniversary.

Quarter of a millennium: From a state-run marketplace to a modern provider of information technology and services

The first efforts to establish a stock exchange in Austria were made in 1761. Ten years later, the plans were put into practice. On 1 August 1771, Maria Theresa issued the charter establishing the state-run stock exchange with the aim of strengthening confidence in the state finances of the Habsburg monarchy. 2 September 1771 was the first trading day in Vienna. Initially, only bonds, bills of exchange and foreign currencies were traded. Stockbrokers, called 'Sensale' on the Vienna Stock Exchange, ensured smooth trading and received a commission. The first stock exchange was located at Kohlmarkt. It moved several times in the course of the next 250 years and today it resides – not far from its first location – in Palais Caprara-Geymüller on Wallnerstrasse 8.

The shares of the Austrian central bank were the first to be listed in Vienna in 1818. Since 1869, investors have been able to trade the shares of PORR AG and Wienerberger AG, the two longest listed companies on the Vienna Stock Exchange. In 1991, the Austrian benchmark index, ATX, was launched. With the introduction of the Xetra® system in 1999, trading became fully automated and facilitated the connection of international trading members. With cooperation agreements in Central and Eastern Europe, and in the mid-2000s also through equity investments, Wiener Börse acquired partners in the region. Today, its focus as a regional player is on providing stock market infrastructure and IT services. Hardly any other European stock exchange of similar size has a comparable degree of diversification and efficiency as the Vienna Stock Exchange.

About the Vienna Stock Exchange

As the main provider of market infrastructure in the region, Wiener Börse AG is the gate to global markets. Operating the stock exchanges in Vienna and Prague, the group offers state-of-the-art systems, information and IT services. Listed companies receive maximum liquidity and investors benefit from fast and cost-effective trading by the market leader. Wiener Börse AG also collects and distributes stock market data and calculates the most important indices of the region. Because of this unique know-how the national stock exchanges in Budapest, Ljubljana and Zagreb trust its IT services. Additionally, the group holds stakes in energy exchanges and clearing houses.