Indicators are designed to help the user interpret time series of price information. There are many different types of indicators, almost all of which, however, are based on price or volume. These indicators are therefore obtained by calculating price and volume ratios.

The range of these indicators extends from relatively simple ones such as the "Moving Average" (MOV) to highly complex ones like the "Directional Movement".

Overlays and indicators allow you to add additional information to the chart. 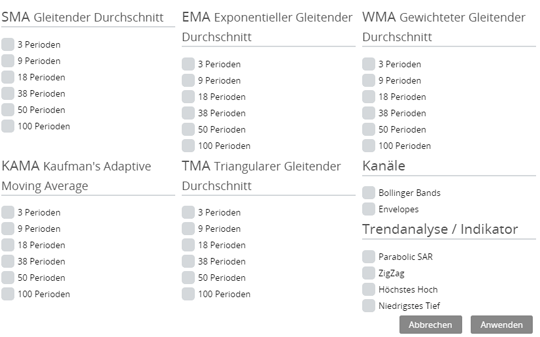 Calculates an instrument's average price over a given time period and smooths chart movements. Through this smoothing of the historical price movement, it becomes easier to recognize trends. A price crossing the SMA from below may be interpreted as a buy signal while the reverse may be viewed as a sell signal. The Simple Moving Average is calculated based on historical data only. For that reason, it is lagging behind the current prices. It does not predict changes of trend but rather follows the current trend. As a result, the Simple Moving Average is best used to recognize and monitor trends.

Calculates an instrument's weighted average price over a given time period and smooths chart movements. In contrast to the SMA, the Exponential Moving Average is weighed exponentially in favor of recent prices. A price crossing the SMA from below may be interpreted as a buy signal while the reverse may be viewed as a sell signal.

Calculates an instrument's weighted average price over a given time period and smooths chart movements. In contrast to the EMA, the Weighted Moving Average is weighed linearly, not exponentially, in favor of recent prices. For example, in a 10-period WMA, the last price is assigned a factor 10, the next-to-last is assigned a factor 9, and the first price is weighted with a factor 1. A price crossing the SMA from below may be interpreted as a buy signal while the reverse may be viewed as a sell signal.

Calculates an instrument's moving average by adjusting for the level of noise (volatility) in the market. It is a measure of the strength of a trend, known as the efficiency factor. In the extreme, all price changes follow the same direction (high efficiency factor) and the trend indication can be accelerated without signaling false changes in trend.

A weighted average of the last n prices, whose result is equivalent to a double smoothed simple moving average. Even and uneven periods require a slightly different calculation method. This leads to a flattening of the curve while simultaneously strengthening the trend signal since small fluctuation are removed by the additional smoothing. It also leads to a reduction in the number of buy and sell signals triggered by crossing of lower average lines. The remaining signals however are stronger and occur earlier than with other moving average calculation methods.

Price or trading channels are a way to visualize trends and ranges in a chart. They help to price levels, at which a trend reversal may occur. If an instrument price stays between two trend lines for a given period, it is said to be within move within the channel. Available channels are Bollinger Bands and Envelopes.

Period:
Period over which the average is calculated. John Bollinger suggests a period of 21 days.

Stddev: number of standard deviations by which the bands plotted are above or below the moving average.

Calculation:
Envelopes are trading bands that are plotted at a certain identical percentage above and below a Moving Average. Envelopes are an extremely complex topic with many rules for interpretation and trading. Basically, however, envelopes capture a significant part of price movements. Any approach of a price to its envelope or any departure from it may thus issue concrete trading signals.

The ChartTrader designs Envelopes that are plotted around a Moving Average at a constant percent distance, i.e. that are added to or subtracted from this average. The two envelope lines thus define the prevailing Trading Range:

Indicators are panels of supplemental information, which are displayed underneath the main chart. There are three categories of indicator:

The MACD, developed by Gerald Appel, is a trend-following indicator, with the abbreviation standing for "Moving Average Convergence Divergence". It is calculated by subtracting two exponentially-weighted average lines, with the default setting calculating the average lines for periods of 12 and 26 days. As a next step, another 9-day Exponentially-weighted Average is determined from this "MACD" curve, called "trigger" or "signal line".

These signals are generally the most successful when the "MACD" line and its "trigger" are far from the central line, i.e. when trend intensity is very high. Frequently, divergences may also be observed between the "MACD" indicator and the price movements of the underlying instrument that is being analysed, which indicates an imminent trend reversal.

The Momentum indicator is one of the most frequently used technical indicators. It is very easy to compute and can be used in a variety of ways.

Alternatively, the Momentum indicator may also be calculated by dividing today’s closing price by the closing price of n days ago and by multiplying the quotient by a factor of 100.

Interpretation:
Momentum measures the velocity, the power or strength of a price movement. The indicator is based on the experience that before reversing, strong price rallies first tend to weaken before the price of a security falls after peaking at the local maximum.

The significance of this phenomenon lies in the fact that by analysing price advances and price losses a chartist can determine what phase the up- or downtrend is currently passing through. As the shape of the momentum curve is influenced greatly by the time lag, the selection of the lag is of critical importance. For short-term analysis, lags of 5 to 20 days are commonly used. If the Momentum line is above the 100 line (abscissa), the price has risen relative to the comparative period and is in an uptrend. The price increase is the stronger the further the momentum is removed from the abscissa. When momentum falls below the abscissa, the price is trending downwards. Buy and sell signals may be generated as soon as the indicator crosses the central line around which it oscillates.

As momentum measures the velocity of the rise, it may happen that the Momentum indicator starts falling in positive territory even though the price of the instrument has reached new highs. Such formations are also called divergences and are indicative of a trend reversal in the near future.

Calculation:
The Relative Strength Index, developed by Welles Wilder is a special form of the Momentum and probably the most widely used countertrend oscillator. Contrary to the implications of its name, the study does not show a security’s strength in comparison to other securities, but rather the security’s internal strength compared to its former prices.

The RSI is calculated in several steps: within a given period, the individual differences between the upward closing prices (close today > close yesterday) and downward closing prices (close today < close yesterday) are added up and afterwards divided by the number of observations minus one. The result is the day’s mean value of the upward and downward strength of the underlying instrument. Thereafter, the "relative strength" is calculated by dividing the average upward strength by the average downward strength. Finally, the RSI is obtained by subtracting from 100 the quotient of 100 divided by 1 plus "relative strength".

Interpretation:
As an oscillator, the RSI indicates the internal strength of a price movement. An RSI of less than 30 shows that the underlying instrument is oversold (no internal strength). At an RSI of more than 70 it is deemed overbought (great internal strength), as a result of which a technical counter-movement has to be expected.

The RSI usually forms tops above 70 and bottoms below 30, which show up earlier than on the chart of the underlying instrument.

Frequently, the RSI develops chart formations (as e.g. a head-and-shoulders formation) that are not visible in the chart of the underlying. Often, the RSI also shows support and resistance zones more clearly than the underlying instrument.

Another popular application is the search for divergences in which the underlying moves to new highs which the RSI, however, fails to match. Such a divergence would be an indication of an imminent trend reversal.

Parameter:
Period: indicates how many values are used for calculating the averages. Wilder always uses a time series of 14 days for calculating the RSI. Meanwhile, other values, in particular 9, 11 and 25 days, have become common. The general rule is: the fewer days used as a basis for calculations, the more volatile the indicator.

Calculation:
The "Stochastic" Indicator developed by George Lane is designed to relate the difference between today’s closing price and the period low with the trading range of the observation period. The "Stochastic" quantifies the position of a price within the prevailing price range. The Stochastic is composed of two (exponential) average lines designated as the %K line and the %D line, which oscillate between 0 and 100. The %K line is calculated as the difference of today’s closing price and the period low, divided by the difference of the period high and period low. For better presentation, this quotient is multiplied by 100. The %D line represents a simple moving average of the %K line and therefore reacts less sensitively than the %K line. These explanations define the "Fast Stochastic". The "Slow Stochastic" provides identical information and is interpreted in the same way but has lower sensitivity. It is designed by renaming the ("Fast") %D line as ("Slow") %K line and by calculating for it another moving 3-day average, the ("Slow") %D line.

Interpretation:
Interpretation: The Stochastic oscillators always range between 0% and 100%. A value of 0% indicates that the closing price of the underlying instrument corresponds to the lowest price in the observation period. Analogously, a value of 100% shows that the closing price represents the highest value in the observation period. Stochastic values above 70% or 80% define an overbought condition, those below 30% or 20% an oversold condition. There are several way of interpreting the Stochastic Oscillator.

Parameter:
Period %K: this is the number of periods that were used for calculating the Stochastic. Default settings are 5 or 14 periods (minutes, days, weeks, ...)
Period %D: the period of the moving average.
Velocity: this parameter controls the internal smoothing of the indicator.

The ultimate purpose of all indicators is to provide assistance in reaching decisions and to help investors to solve the everlasting problem of identifying the right timing for buying or selling a security. Indicators are designed and plotted to process and highlight the information contained in prices. While indicators do not contain any new information, they can serve as means of increasing transparency and assist to interpret the underlying situation.